Due to issues ranging from global warming & Mallan yet again finding a Kallana ( a pigmi elephant found in Agastyakoodam area) I couldn’t post the second part for so long ! well well. This is yet another March and this year also it seems I am not in a position to complain about a bad hike. I have no hike. The world is still flat and the life is going on. Oh, yea we made sure that 33% of the seats in our democratic temples are reserved for woman, we are about to make sure that the radio active rays from nuclear reactors exploding due to manufacturing defects etc by the companies who provides the equipment will not cause damage more than 500 crores, we had something called budget and as usual opposition were unhappy and in my little state – Keralam – certain political parties took all possible measure to make sure that in the next elections they don’t stand a chance to ‘serve’ us.

Ok, The trip to Agastyakoodam happened long ago, before  any of this happened. The world was still flat then and the date was 29th Jan 2010. We were at the base camp and made plans to start bit early the next day. I was was sure that not going to work and slept peacefully inside my sleeping bag. We woke up around 6:30 AM, got our breakfast packed and after few cups of tea started our trek to the peak nearly 8 O’ clock.

From the base camp the peak looked challenging and we were aware that the climate dramatically changes at the top. But today it seems its a pleasant day and we will not face much difficulty. I had all geared up and assortment of stuff including lenses, additional battery and first aid kit packed inside a photographer’s jacket and a wind sheeter to protect all this from rain and few plastic covers. 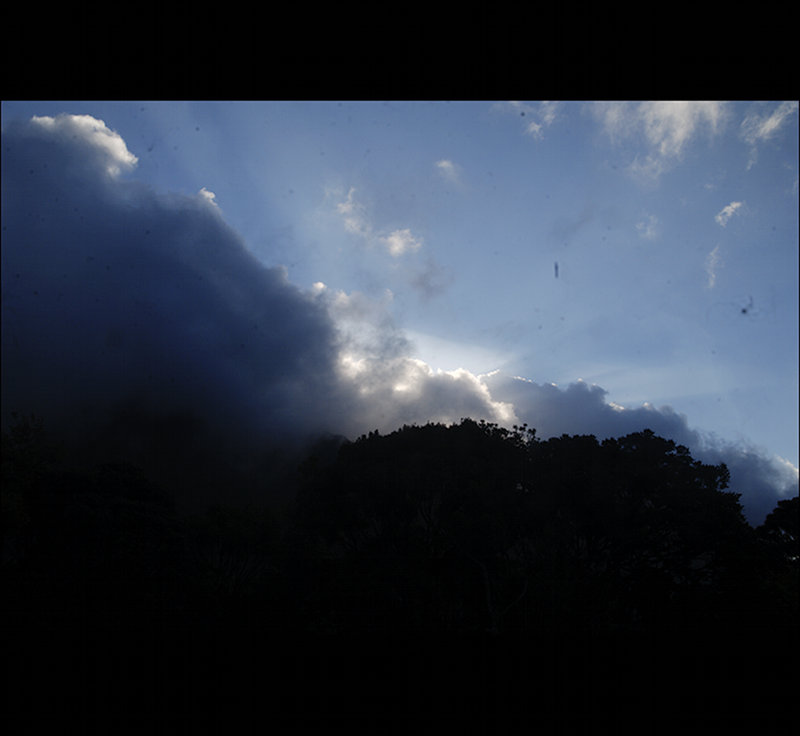 The initial trek was easy but seemed to be a terrain where we find elephants a lot which was bit scary. But the possibility of seeing a pigmy elephant was nice too 😉 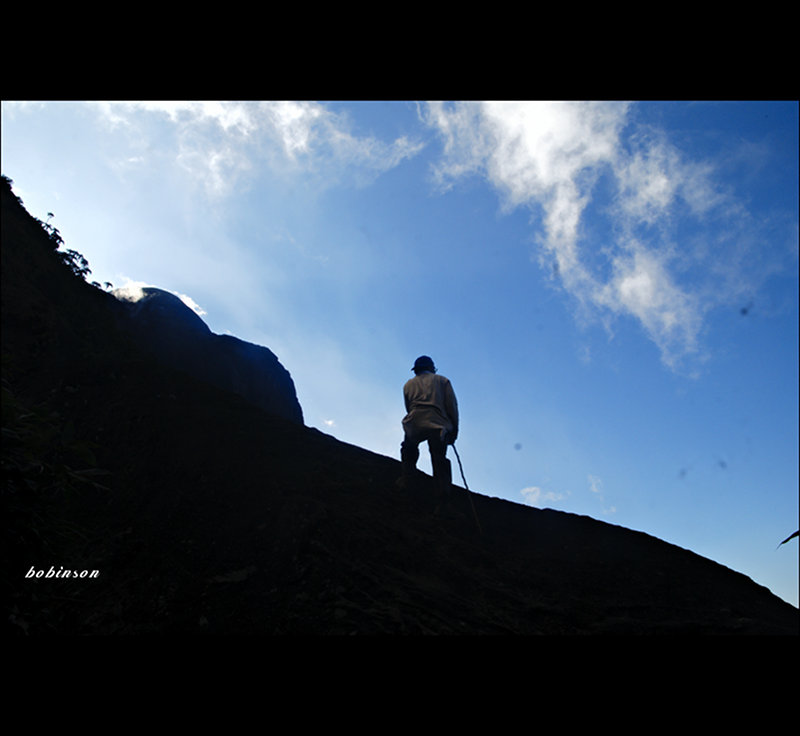 Once we were out of thick forest the steep climbs started and mist started arriving from nowhere. Four of us had visited the peak earlier and they started explaining about their earlier journey and how they crossed a dangerous stream which is just ahead of us. 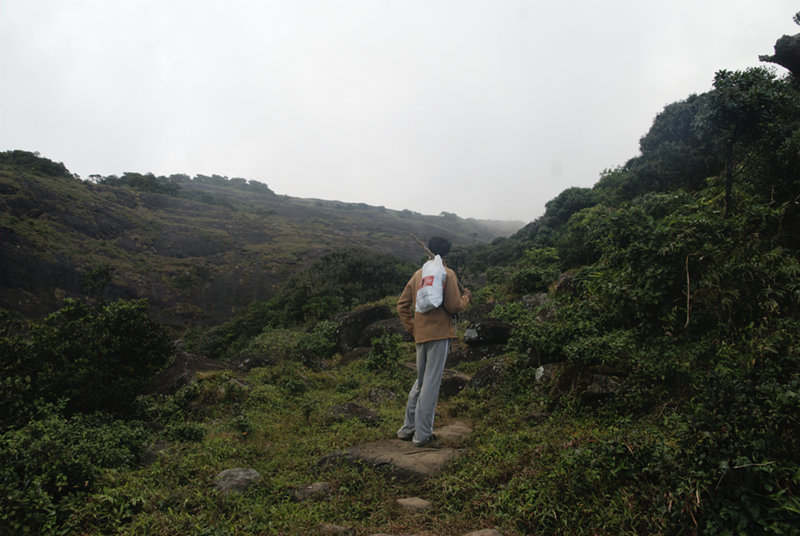 The atmosphere started getting colder and windy. Mist was coming with the wind and the wind was strong enough that we started feeling it agiainst us. I found it was a good decision to leave the camera bag behind. 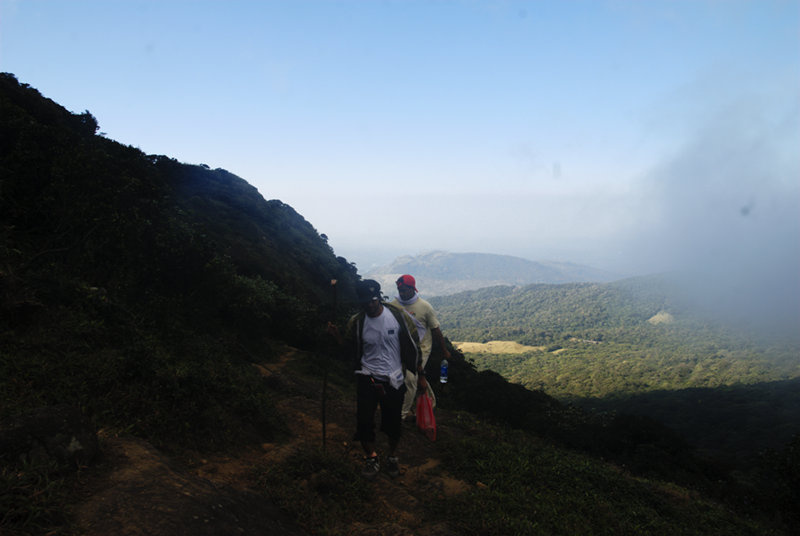 mist starts flooding with the wind. We can see it spreading in this photo. In ten minutes we were immersed in it. 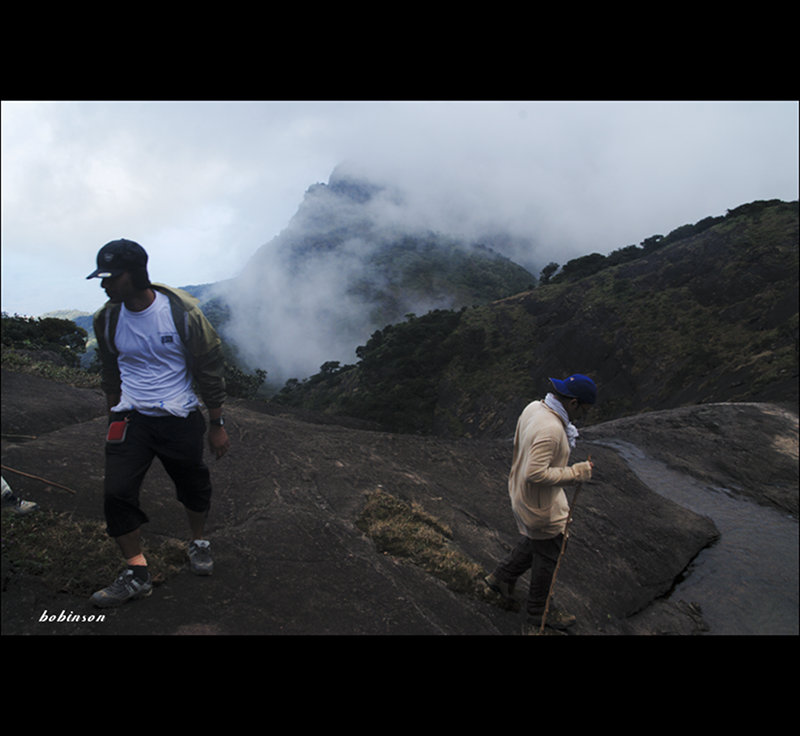 the stream which 3 of our team had crossed with much difficulty during their previous expedition. I must It was a real dangerous attempt from their side. Something which others should not try at home. 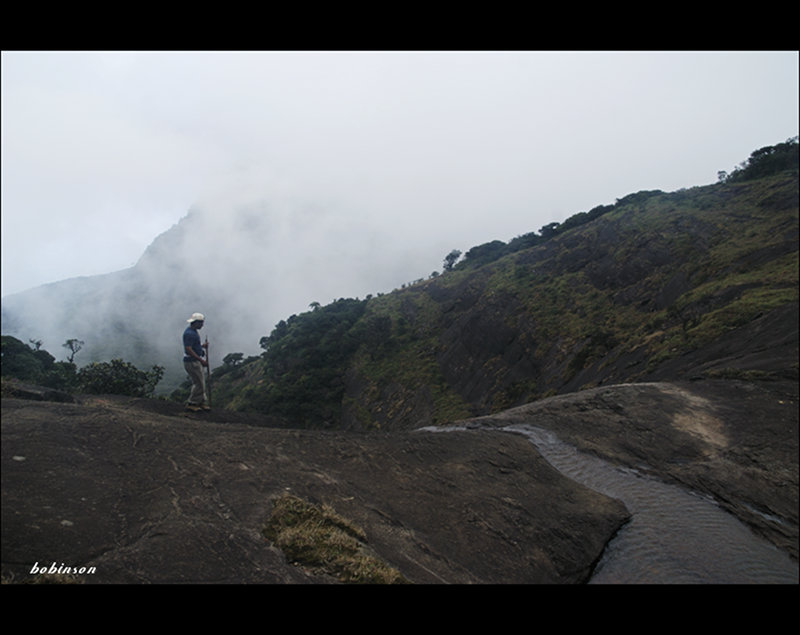 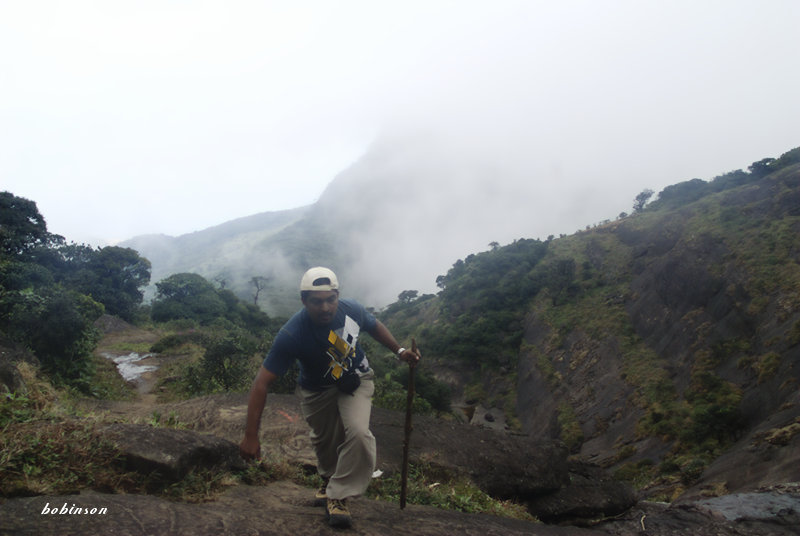 its a good idea to be careful here. Travels give us a time to contemplate about life. It sometimes leaves us with nothing to hold on to. All that can take us forward is how carefully we plan our next step.

Last 5 photos were taken in 10 minutes and the place was suddenly misty and we couldn’t see anything beyond 5 meters or so now. We started climbing up decided to have our break fast near Ponkalappara. 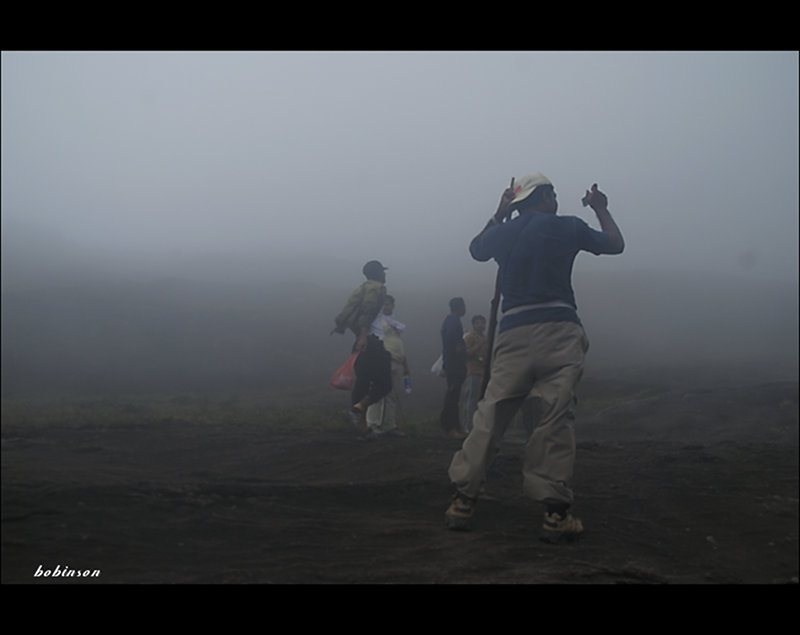 After the steep climb we reached a clearing. The place had suddenly became extremely cold and wet. If the same climate is going to continue it is going to difficult to climb the remaining path and that was not a pleasant thought at all. 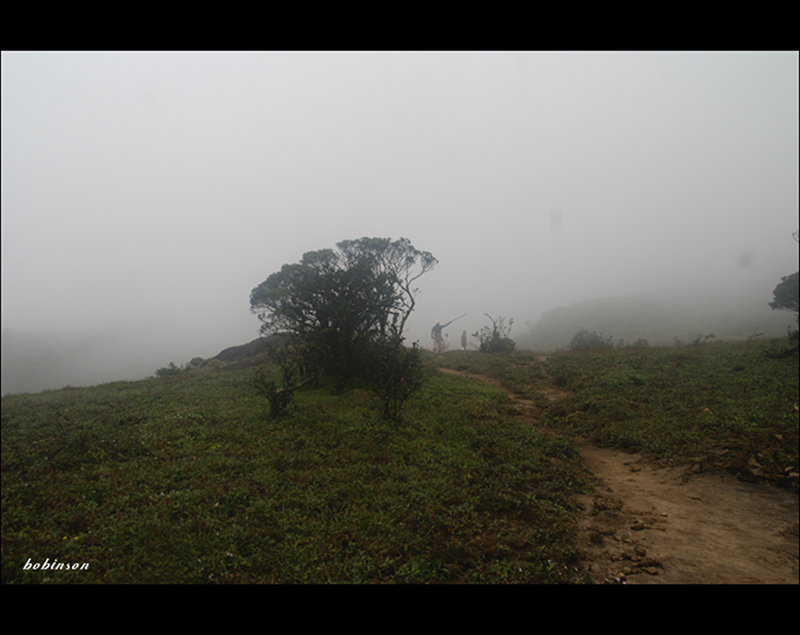 We sat down near a small stream for breakfast. I had poori with me and some had uppumaavu. By the time the whole place was covered with mist and all that was remaining now was rain. It looked like we must expect heavy rain any moment now. The sudden change in climate was very strange and quite unexpected. 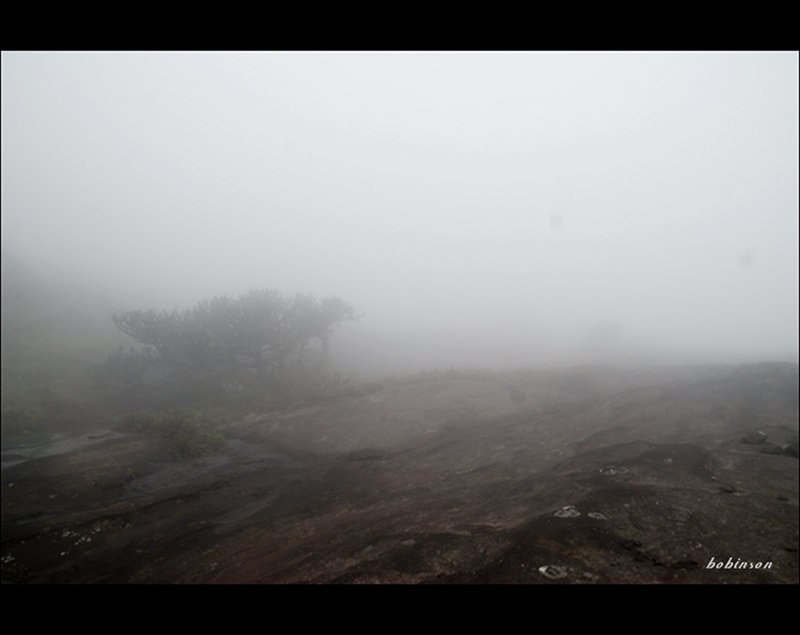 The climate soon started getting better. Yea, as I was told a 100 times this place is different ! 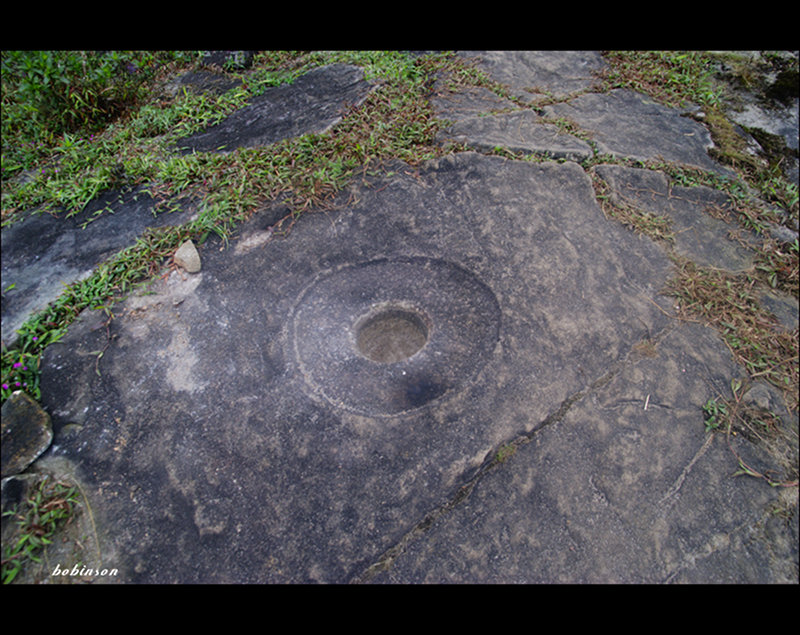 One life. We all have a life to leave marks behind. Here is how someone to choose to leave a mark behind. This was created by someone so that whoever climbs the mighty mountain remembers him. (there is no myth behind this. its very recent – modern)

Man is always keen to worship what he doesn’t understand. It seems a recent example will be film stars whom we don’t understand. We build temples for them when we find it difficult to understand how a feeble man can fight hundreds and cause “Neo Effect” on bullets. The earthly mark in the previous photo may became a similar one in next 100 years. 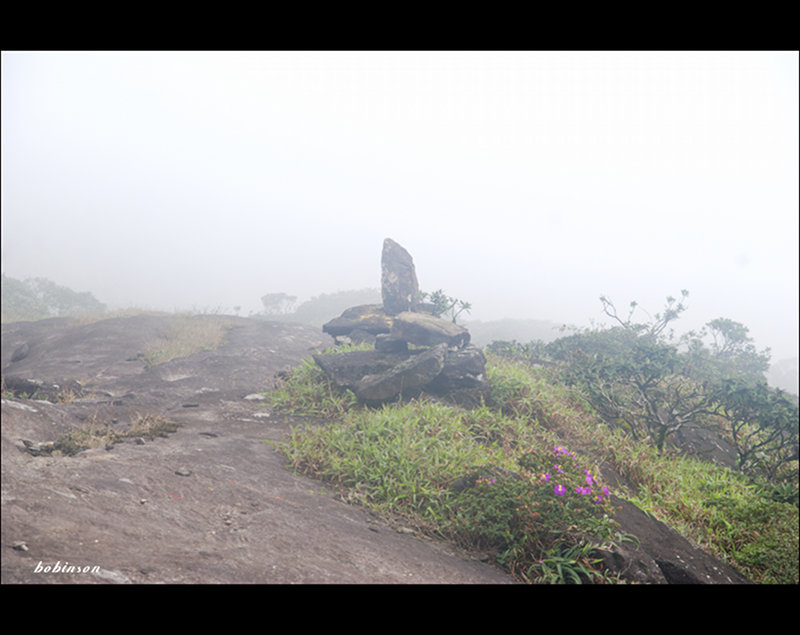 if we don’t understand, we will worship. If we understand we will destroy. We are humans. 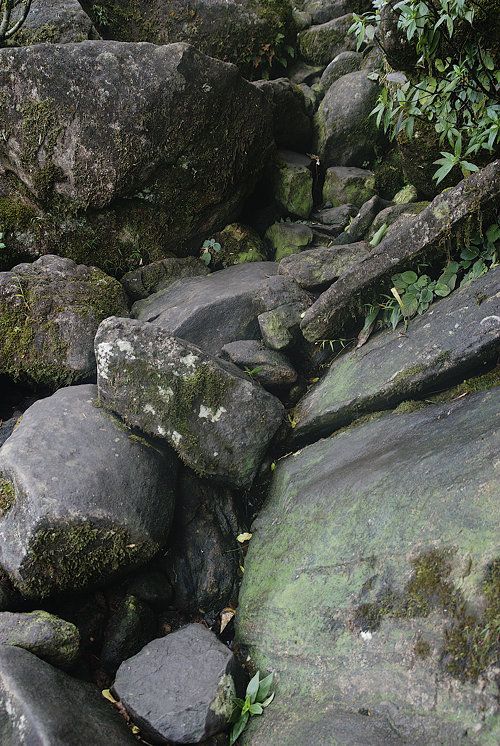 where the mystery forest starts

The climate had become normal again and the visibility was good too. We started climbing up through a narrow slippery stream. The terrain again looked promising but I never expected it will make me realize that being alive is such a great thing and life is so beautiful.

Part1 is here: Trekking to Agasthyakoodam day one